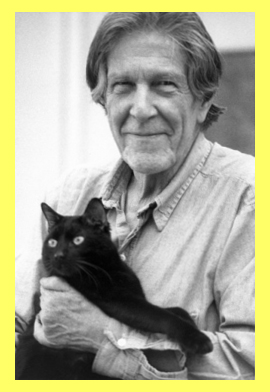 This is a collection of links to infomation on composer John Cage. Please send any corrections and updates to me at josh (ate) ronsen (dote) org If you have any questions about Cage, the perfect place to ask them is SILENCE, the John Cage Discussion List, which can be joined at https://lists.virginia.edu/sympa/info/silence. The John Cage Trust maintains an active presence for dealing with legal issues related to performances and publications. NEW! means link added in past update or so. Photo of Cage and Losa by Sabine Matthes, photo copyright Sabine Matthes.

Leaving aside the many beautiful scores by Cage that could be considered "visual art," here are links to various paintings, sculptures and other visual artworks made by Cage.

(dates with ? are approximated by Josh Ronsen)